It all started when Team FatBird partnered with Korea Tourism Organization (KTO) and Dynasty Travel International to develop the Korea Marathon Series Program in 2014 – a comprehensive Korea marathon-travel package for Singaporean runners. Team FatBird has since provided marathon training and given information clinics and workshops about the Korean road races of Chuncheon Marathon, Seoul International Marathon, Daegu Marathon and the scenic and themed marathon races like Jeju Mandarine International Marathon and Gyeongju Cherry Blossom Marathon. 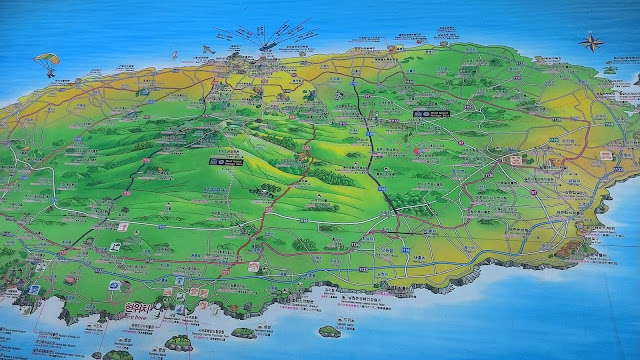 When the opportunity came for me to do the Jeju Mandarine International Marathon at the invitation of KTO, I grabbed it with ernest although I had already completed 3 overseas marathons (Taipei SC, Gold Coast Airport Marathon and Sydney Running Festival) this year.  Coming off the Sydney Marathon in September, I still had the base to complete another marathon with some tune-up. 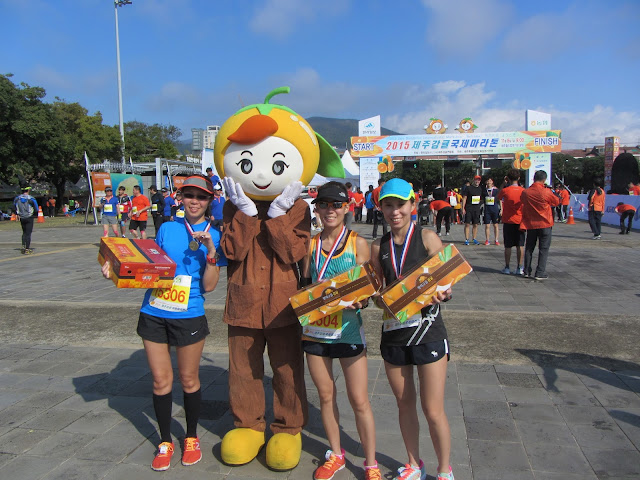 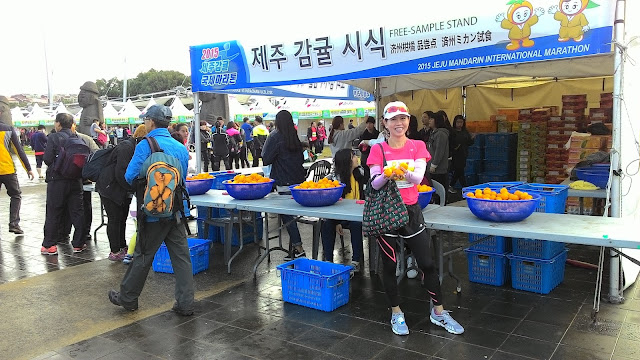 Since doing ChunCheon Marathon in 2008, we have not been to South Korea for another race.  I managed to ask Beverly to attempt the Half Marathon along with my Full Marathon to get a first-hand feel of a race we had heard much about.  Together with the media and a Dynasty-led travel group of Singapore runners, we had a team of about 15 (a total 26 runners from Singapore participated) signed up for distances of 5km, 10km, HM and Full Marathon.  We were happy to hear that we would have our own hospitality tent at the race site for pre-race meet-up and post-race recovery. 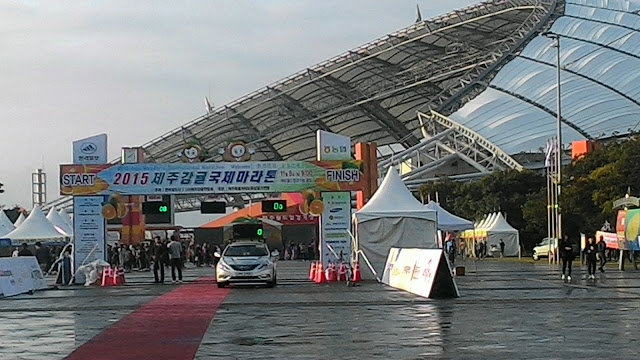 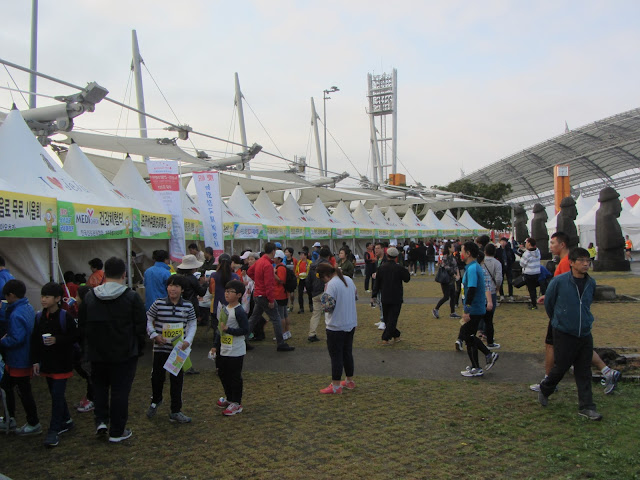 We flew Asiana Airlines on Friday night and landed in the morning after a short 6-hour flight to Incheon International Airport.  On arrival we were received by the ground travel agent and whisked away for early lunch and some sightseeing before taking a 1-hr domestic flight to Jeju Island. 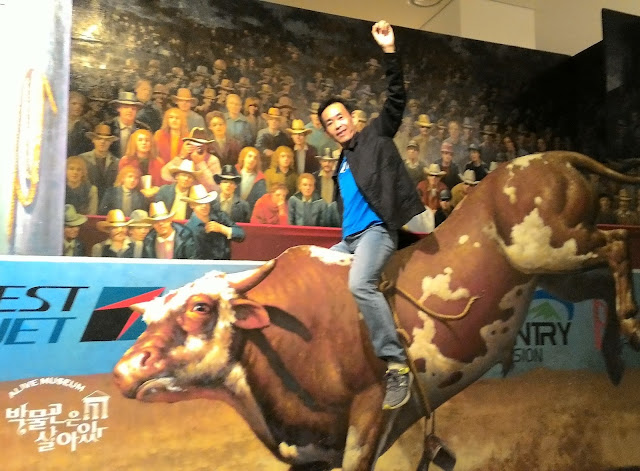 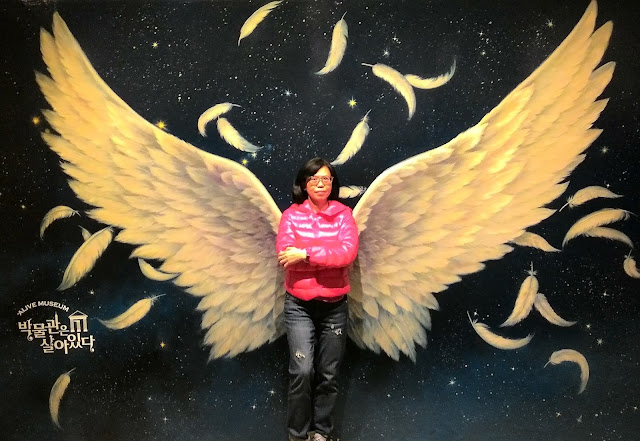 At Jeju Island, we were received warmly by our hosts from Jeju Tourism Organization who provided us immaculate support over the next few days with race support and travel-related arrangements.  We had a good time visiting the Alive Museum and was suitably impressed with the technology at the Play Kpop Museum.  After a good dinner of Korean BBQ, we checked into the nicely furnished M Stay Hotel, with our race packs already collected. 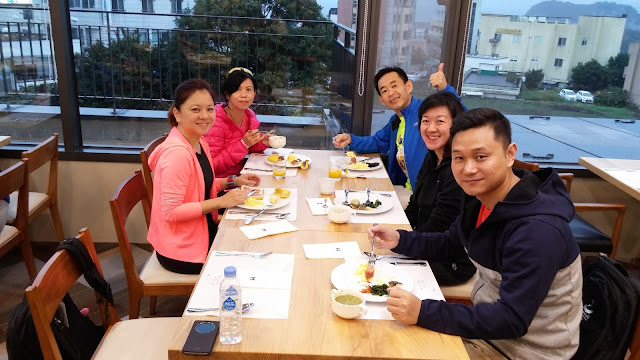 Tired from a long day of flying and sight-seeing, I flopped into bed after having a nice warm shower and laying out my race gear.  The BBQ dinner of beef, pork and loads of vegetables provided the protein and good carbs as fuel for the race. 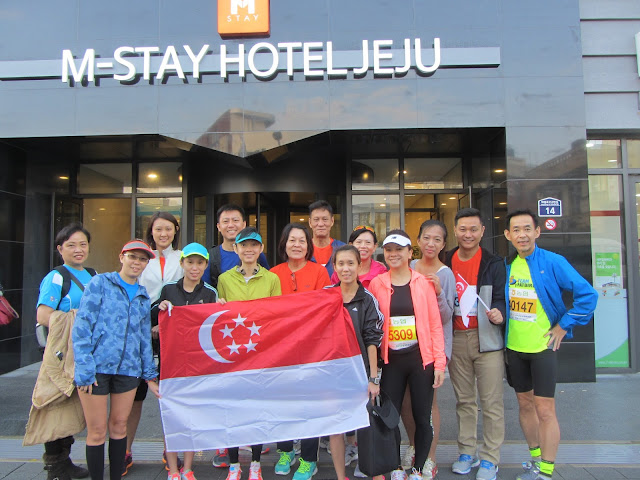 As the flag-off of the Jeju Marathon is at 9:30am, we had the luxury to enjoy a good sit-down breakfast of eggs, croissant, cereal and coffee at the restaurant.  A group picture in front of the Hotel set the tone for the high spirits of Team Singapore as we boarded the transfer coach provided by our organizers to the race site at the World Cup Stadium. 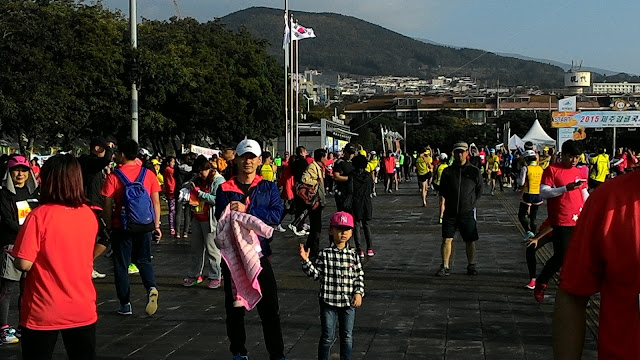 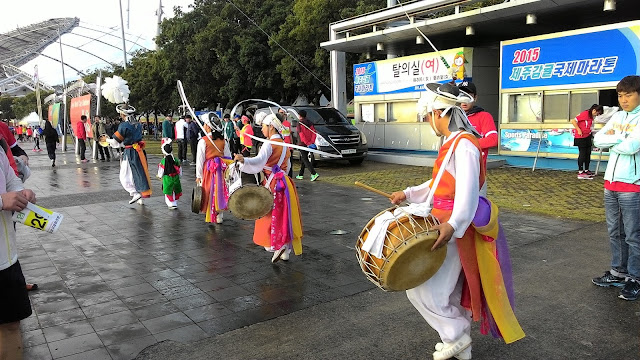 There was a hive of activity when we arrived, with many tents put up for different running groups from various countries (China, Taiwan, Singapore) having respectable representation.  Colours of Orange, Red, Yellow filled the stage area just outside the Stadium. 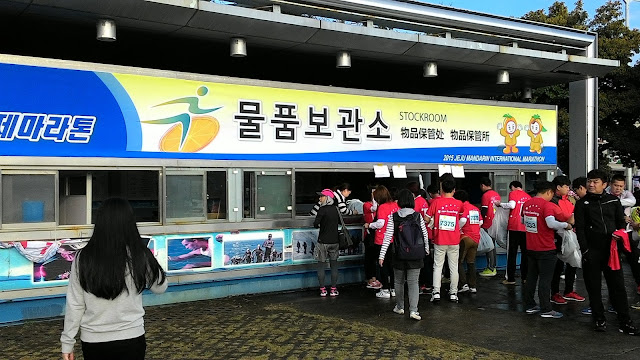 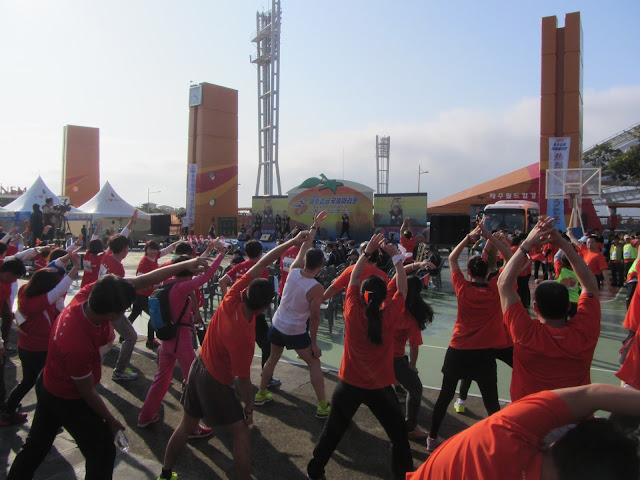 There was the girl band entertaining the crowd with song and dance, with routines to warm up the crowd.  The layout of the race site was friendly, with special changing rooms for men and women
The Race 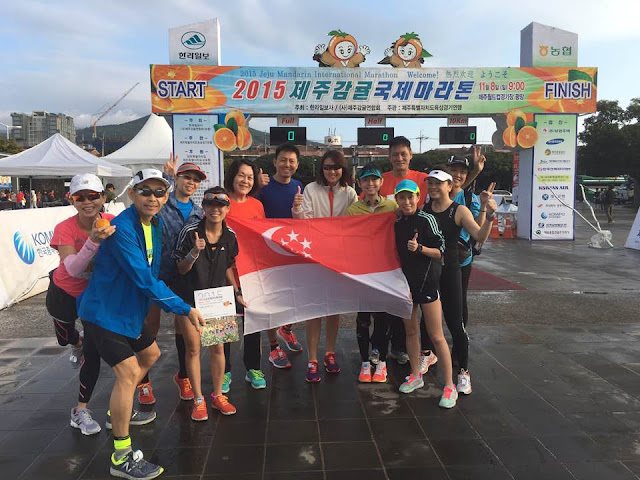 After all the group photos, checking in my baggage, and a little warm up prep, I lined up up front at the start point.  The temperature was a very conducive 21C with a slight breeze.  After a few quick announcements, we were flagged off to the sound of the horn by the VIPs, and a flood of confetti provided an exciting mood.  Immediately we ran onto the road leading though the township into the highway.  As there were lots of room with not a large crowd, I was able to settle into my comfortable 4:50min/km pace. 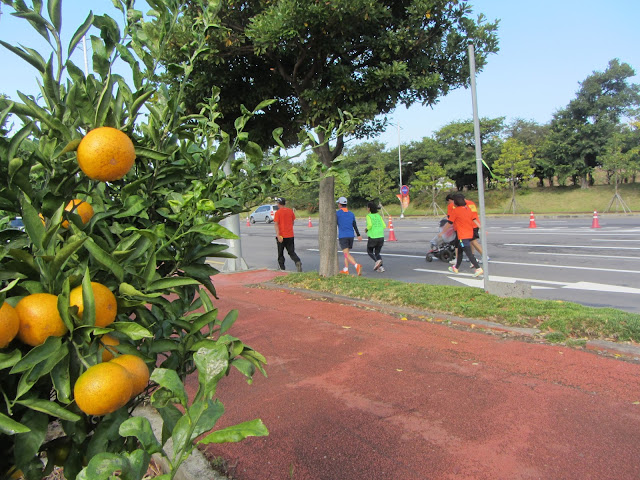 The Korean runners were all serious and competitive, which made for an interesting run as there was nary a dull moment with a crowd to run along.  Within the 1st 500m, we were already encountering rolling hills of gradients from 60m-100m of elevation throughout the entire distance.  The course was a straight out to-fro of almost equi-distance for all the various race categories, making it easy to follow and having all the runners experience segments of similar challenges and conditions. 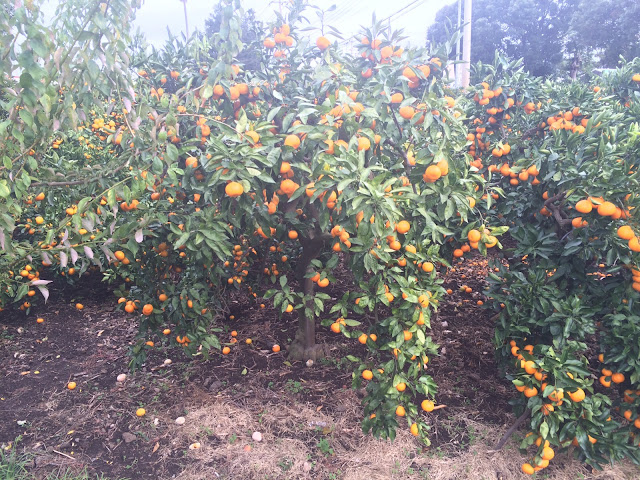 As the Tangerine (Orange) is a famous product of Jeju Island, the runners can see Tangerine bushes with the orange-y fruits all along the course giving that distinct flavour of this race.  The 10km runners U-turned first, followed by the Half Marathoners, but not without navigating their fair share of rolling hills before turning back towards the World Cup Stadium for completion.
The Next 10km
After the Half Marathoners U-Turned at about the 10.5km mark, I proceeded straight ahead only with a sparse few Korean Full Marathoners for company.  We bunched together for a bit, and moved into 4:40min/km pace for the next 10km, all giving one another the silent encouragement to maintain the pace in spite of more rolling hills in front.  At about the 18km mark, we saw the eventual Champion Kenyan Runner past us, and we cheered one another on with applause and smiles. 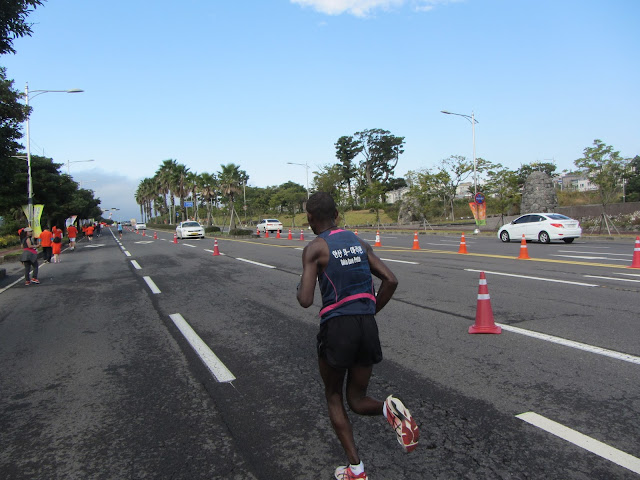 I dropped most of the runners with me by the U-Turn at 21km with a HM split of 1:39min, as a few of them dropped their pace back to 4:50min/km.  On the turn-around, I immediately faced a steady flow of headwind providing another challenge to the slopes.  The sun was also out by then, raising temperatures slightly, however with a balance provided by the cool winds in our faces.  I was still feeling good at that point as I began to overtake the slowing runners in front.

21km-32km
The next 10km was a matter of sustaining the 4:40min/km pace with refueling and pacing sufficiently to avoid ‘bonking’ or getting cramps too early.  With each hill ascent, there were tiring marathoners to pick off and also shouts of of ‘Fighting’ (Korean words of encouragement) from school children and enthusiastic supporters.  I was still maintaining well till 28km, where the number of slopes drained my energy that I had to slow down to 4:50min/km pace or I might blow out. 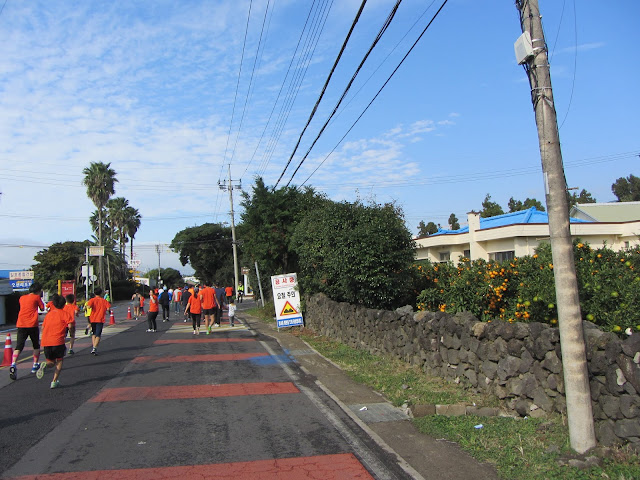 With the variation providing to different parts of my running muscles, the ups and downs of the course was a boon in helping to stave off any cramping threat – you get advantages even in seemingly challenging situations.
The Final 10km
After I passed the 33km mark, I could see the city skyline in the backdrop.  The traffic police did a great job of stationing at every turning point on the highway to stop vehicles for the not-too-many marathoners to run through, allowing us to continue with our momentum forward.  However, I was slowing to 5:00min/km pace, and yet was overtaking runners in front who seemed to be getting some cramps, possibly from ‘over-heating’. 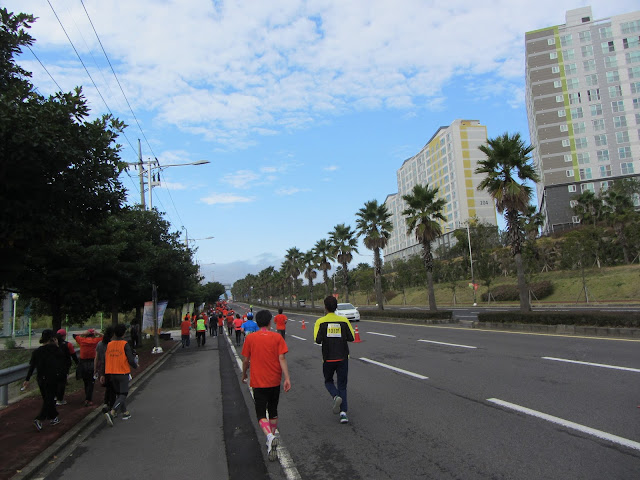 I was cautious not to evoke any cramps and was just happy to slow down even more when tackling the upslopes.  I tried to make up for some of the lost time on the downslopes, but even that taxed my quads to an extent I have not encountered at other races – I was just appreciating that it would be good conditioning for my Boston Marathon debut in April 2016, which is known for its ‘silent killer’ long downslope start. 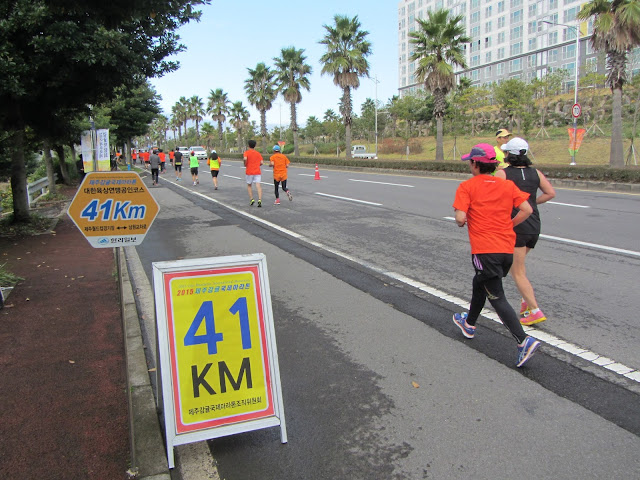 The Final 5km
The steepest slopes came in the final 5km, and that was the point I had to make a tactical decision to walk the steep upslope of about 200m, in order that I can complete the race below 3:30h. 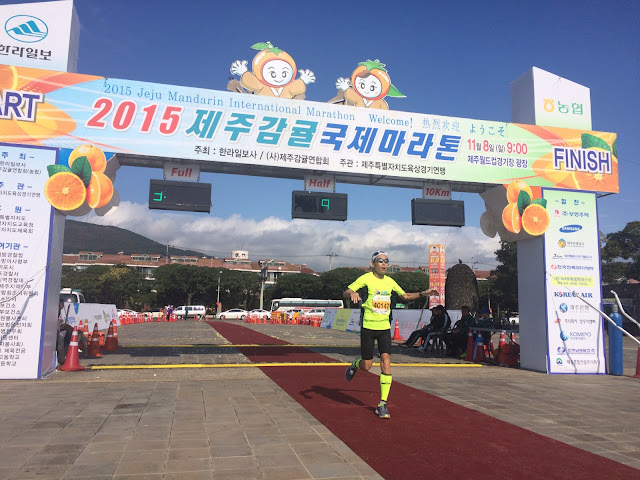 The final 2km was a run for time as I clipped off a few more runners to complete at the Stadium grounds in 3h29min10sec, to a rousing welcome back by the team from Singapore (who had finished their races earlier). 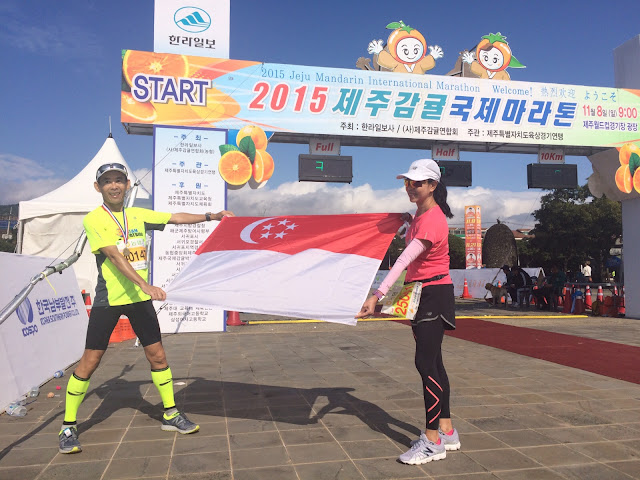 It was not too far off from my Personal Best (PB) Marathon Timing, and I made my second Boston Qualifier (BQ) within a few months.  I flew the Singapore flag proudly with Beverly (who also did a very good timing for Half Marathon of 2h4min) at the finish line.  I collected the finisher medal and was duly rewarded with a 5g box of tasty mandarin oranges (given to all international race participants). 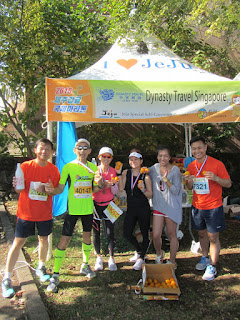 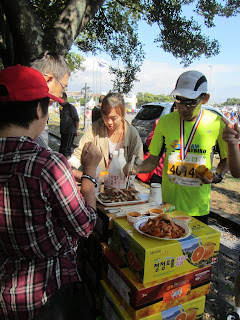 We gathered at the Singapore tent, just next to the Taiwan tent, and jointly celebrated our team’s successes with ‘Black Pork’ meat and special Korean fruit juice, and of course lots of group photos together.  Most of the runners from Singapore did respectably well in the face of all the rolling hills, as the nice temperature and sense of new challenge provided the impetus for many Personal and Season’s Best timings, not to mention the great feeling of accomplishment all can only experience from coming out tops on a challenging course. 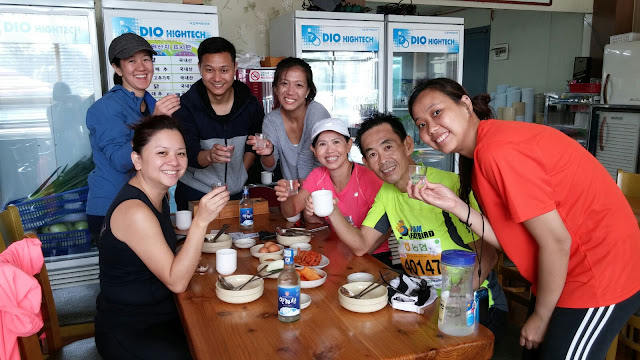 Our Jeju Tourism host brought us for a delicious Post-Race lunch of famous Korean Ginseng Chicken, topped with Shio-jiu for a celebration toast for the good run by all, and to give thanks to the great weather we had during the race.  That was followed by a wash-up at our Hotel before proceeding on with a recovery walk to the Olle trails to aid clearance of the lactate built-up and reduce leg soreness. 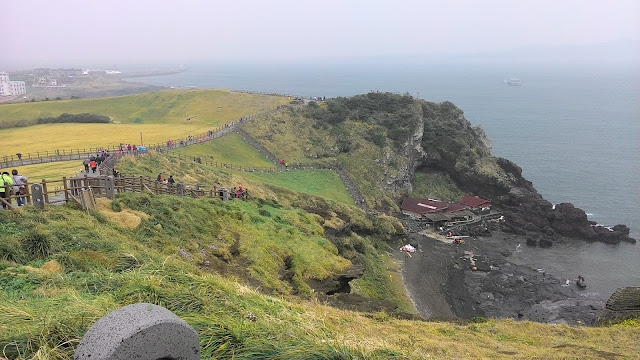 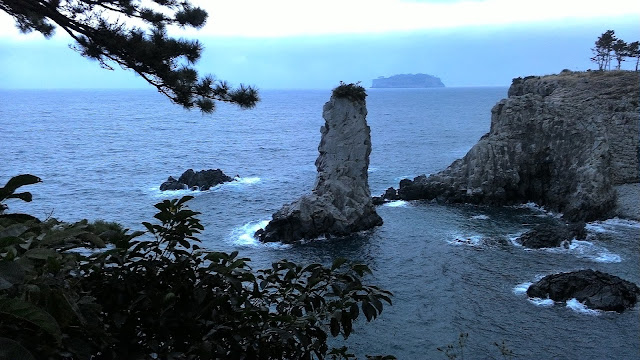 I would like to express thanks to the Korea Tourism Organization and Dynasty Travel for putting together and managing a good marathon-specific travel itinerary for us, and the Jeju Tourism Organization for being such great hosts in coordinating all race matters, communications bridging, as well as bringing us to all the great food places and showing us the numerous sights and delights that Jeju Island has to offer.
Positive Race Experience
Late morning start gave runners more time for proper breakfast and preparations
Straightforward route with no sharp turns (except for the U-Turn)
Great weather
Good Organization
Sufficient Water Points every 2.5km
Good traffic control and management
Accurate distance measurements for all race categories
Changing rooms provided
Clear and regular distance markers
The rolling hills provided sufficient range to stave off cramping from overworked muscles
Special finisher gift of mandarin oranges
Printed Finisher Certificates with timings
Areas For Improvement
Change of terrain to run along more scenic coastal areas will be nice
Additional English signage for the international participants
Provide Finisher Tee for the 10K, HM and FM categories
Finisher Medal should have different sizes and distances denoted for respective categories
Provision of a few PowerGel (in addition to the banana points) stations for the HM and FM
Signs to denote upcoming water and fuel points to better prepare tired marathoners
Overall Race

With about 3,500 participants, the Jeju Mandarine International Marathon is a cozy run with good organization and management of the race site, race course and traffic control.  The atmosphere is conducive for the marathoners, and there was very short waiting time in lines for race start.  The reward of a 5kg box of the island’s famous Tangerine fruit adds an element of uniqueness to this race. 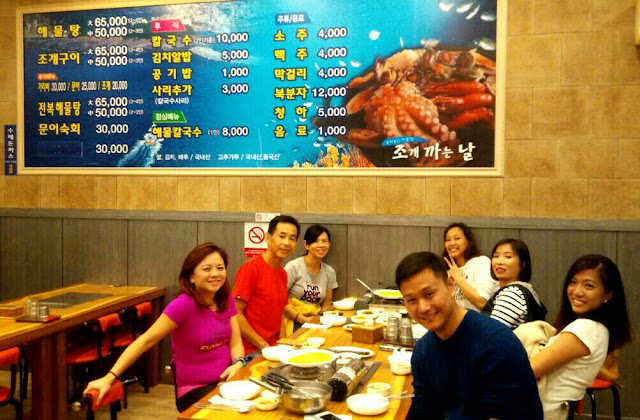 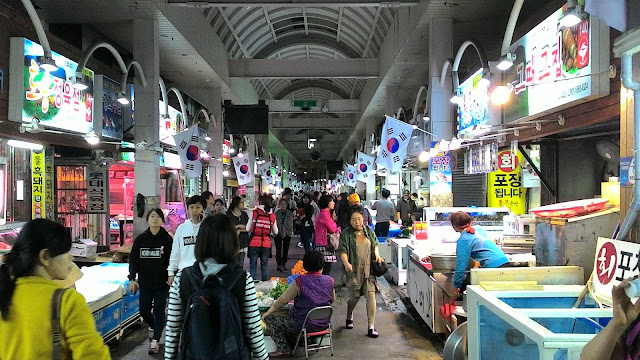 Overall, I would rate the race course as challenging but the great weather and race atmosphere helped to boost the race to a should-do race for those who are seeking a good overseas run with friends and family, soaking in the pretty scenery and ‘happening’ activities, and enjoying the fresh seafood and local produce – making it a wonderful marathon holiday for the health-conscious runner.